By GK
The chap behind successful restaurant chain Las Iguana's is opening a new Caribbean styled restaurant just a few train stops from Twickenham, in Staines (Upon Thames). This was a fantastic opportunity to check out eats on the other side of my normal route, and on this occasion with fellow foodie blogger msfoodblogger.com. The restaurant's food takes influences from all around the Caribbean so there is a real eclectic element to their menu.


After a wee trek around staines High St, ok we got lost, but we made it in plenty time to enjoy a few cocktails before tucking into a banquet of their dauntlessly spiced food.  It really blows me away at how these folk set up these restaurants, hire and train staff in record time and above all manage to fit out the restaurants with fun atmosphere and great food at reasonable prices (Turtle Bay reackon you can get decent caribbean based cuisine & drink, fun atmosphere for around 20 quid).


Firstly though, as a priority of course, I need to talk about the rum cocktails. Their selection of rums is extensive, and I think their Bar Manager said they have around 40(?) rums that include options from Jamaica, Blackwell, Barbados, Venezuela, St Lucia ...etc There was, however, much debating and banter from a group of fun and lively guests of one who claimed the St Lucia rums 'Don't do nuffin!'. I settled on a cocktail called a Marley which had ginger, mint, rum and midori, and over the course of the evening tried The Koko colada (a twist on the Pina Colada) this was popular and I really enjoyed their Tobago Tea and found their Zombie cocktail as the one with the most boozy kick!

After a couple of pre dinner cocktails we settled at one of the tables near their Jerk Pit. To start we were presented what was called the Beach Platter. A selection of corn fritters, chicken wings, rolled flatbreads and hot pepper roti's. The hot pepper roti's were by far the best, a delicate pastry filled with melted shredded cheese and scotch bonnet (100,000 - 400,000 Scoville so you have been warned). I don't consider scotch bonnet too bothersome, its a decent kick but if you can't handle a bit of heat there are other options. 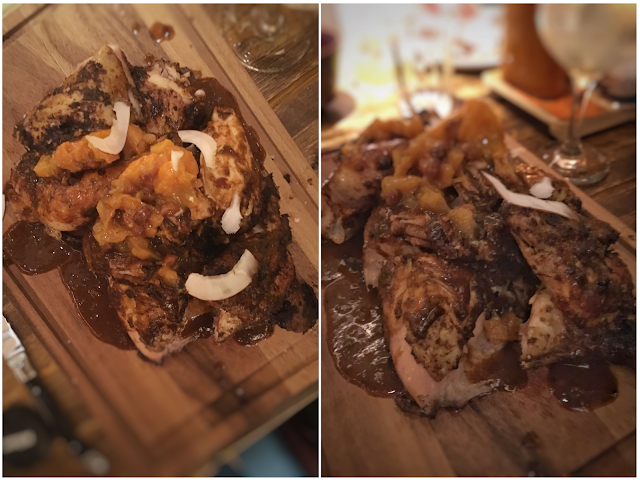 For mains we had a delicious goat curry inspired by the Trinidad hot pot styled cooking, incredibly succulent jerk chicken, caribbean styled doughnuts, rice and peas and more. The Jerk chicken was fabulously spicy and tender. To cook, the process involves marinating the chicken for a period of time, then steaming so you get extra moisture into the meat. Following that, it is roasted and dressed in the marinade again before being layered over a piping hot grill. The staff explained that while the chicken is grilling, its brushed with marinade - this drips onto the hot coals. I do the exact same thing on the barbie, what it does is create a smoke that permeates into the meat and skin for maximum flavour. The chicken meat itself was very moist as well. 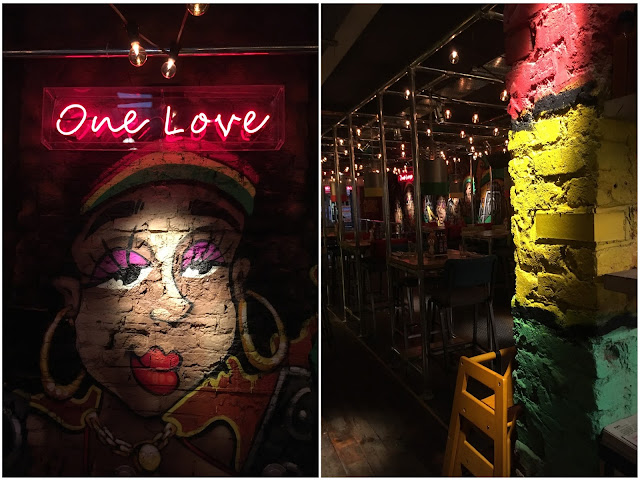 To finish off we had a round of sweets of lemon and lime tart (very citrusy), banana and toffee cheesecake, choc brownie and rum cake. The room itself is over laid with reggae themes, and bright colours. It has a focal central bar and splits into different eating areas. Some more formal bench styled seating and others more relaxed beach shack areas. I think this is bang on for anyone who loves relaxed style dining, bit of fun and can obviously handle a serving of heat in their food. Turtle Bay open in Staines on the Tuesday 21st June.