By GK
La Salon Prive (The Private Lounge) is actually a newly re-invigorated, and much needed refurbished Brula - a French Bistro restaurant based in St Margaret's, Twickenham for over 15 years.

The restaurant went through an ownership change back in January (the former owners having connections with other Richmond restaurants, La Buvette and A Cena, as well as Covent Garden restaurant Joe Allens). The new proprietor happens to be the same owner of a very popular Italian restaurant, Bacco, in Richmond. Bacco is one of my top Italian fine dining eats and here's a review of Bacco here.

La Salon have kept the lovely glass stained windows but have totally redone the inside. Formerly the restaurant resembled something similar to your geriatric granny's living room - it might seem charming but it really felt like it had been under-invested, incidentally a similar theme also exists at Richmond restaurant La Buvette. After La Salon's refurbishment the room feels much lighter inside, it has a more modern pin-cushion bench seating similar to a New York styled grill, and the service is impeccable. This is unsurprising coming from the owner of Bacco who's table service runs parallel to that of Michelin dining. The staff are a mixture of French and Italian and given that it is a French restaurant, it was surprising to learn that in fact the head chef was Italian. I was informed that he has worked with French cuisine for ten years and to be fair it made no difference to the food - it was great.

The wine menu is decent with nicely priced carafe and wine by-the-glass options available - a far more flexible approach from Brula and so far I am really liking the new venture. My starter above is seared scallops, apple purée, black pudding and Alsace bacon. The different textures and sweet salty flavours of the puree and bacon worked incredibly with the creamy black pudding. It might seem unusual to pair black pudding with scallops but I have seen this done before, with haggis believe it or not, and it works amazingly well. Really delicious, it took the force of a thousand oxen to prevent me from licking the plate & embarrassing the Chic Geek. That's ok because he managed to startle the maitre d'/sommelier and our dining neighbours by coughing up the wine while he was tasting it with the maitre d'. Amateur wine tasters - this will happen to you, just shake it off. :-)

The chic geek had Dorset crab mayonnaise, soft quail eggs and samphire - another great starter.
This is La Salon's strong point - their seafood is fresh and beautifully cooked. I have seen a couple mediocre reviews on OpenTable (most are great) and am baffled by some posts on there. I can only think some folk just don't like change - even when it is for the better. 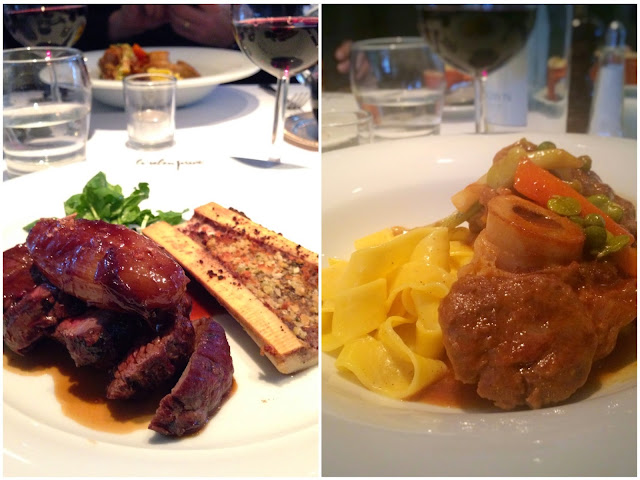 Our mains were more med styled - I had a very nice rump steak with bone marrow and the geek had a slow cooked veal shin with ribbon pasta which incidentally also had bone marrow that rivalled the one I was served. This plate was a favourite for the chic geek and the pasta understandably, was outstanding. My marrow looked impressive but there wasn't enough there. I had a side of gratin dauphinoise and broccoli that were nice enough. The steak was medium cooked and being rump it was hearty and meaty - if you order rump it will have all the tough rump characteristics, but with definite flavour as well.

We finished off by sharing a selection of cheeses. To me La Salon Prive is a much needed and welcomed change. Their seafood is beyond good so I would recommend trying at least one of their fruit de mar offerings , I understand they do a lobster and chips for a reasonable price too. It has a great dining room and lovely facilities and am pleased they have landed in such a great area in Twickenham.
Note: reservations for fixed menu's - La Salon offer a 3 course for 18.50 until 7pm - I queried if this works having a 7pm booking he replied that on this occasion he would allow it because they just re-opened but in future they were going to be 'very strict' . So folks - just to clarify if you want the fixed menu's book a time slot before 7pm.To be honest, its a pretty good offer - most places are far more restrictive on fixed menu's. They are usually only available on a Sun,Mon,Tue. and La Salon have it available every open day.