By GK
If you've ever been to Barrafina before and haven't bothered organising a table anywhere else, you'll find it really hard to resist getting the nearest cab and high-tailing it to one of their three eateries to enjoy some of the best tapas around. We'd just finished watching the latest round of pool matches for the Rugby World Cup in a great little Irish Bar - Philomena's, with some of London newest tech stars - Kimono. It has to be said that Barrafina is one of the 'no reservation' restaurants where yes, you will find yourself questioning why on earth you'd decided to stand in a queue under bright lights, in a cramped space with people literally eating in front of you, just to get some solace of warm food. However, if you persevere and exercise a little patience, maybe enjoy a Rioja or two while you wait, you'll be ushered up to the next available seats at one of UK's best restaurant's in no time. 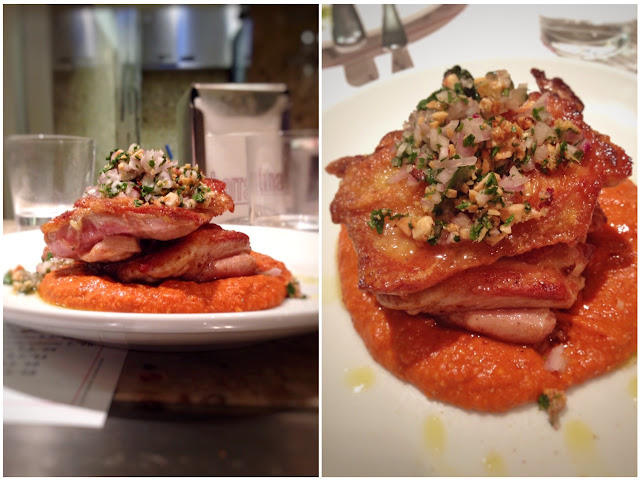 I was disappointed when I sat down to find that one of their star plates - The Octopus was no longer being served that evening. After we'd ordered all of our dishes, we were informed that Octopus was magically back on the menu... but not before we'd started with the John Dory, served with loads of garlic, parsley and butter. I think it's fair to say that its reasonably hard to find badly cooked fish these days (unless you are at a festival), so it follows that the Dory was fresh and cooked well. So too was the chicken thighs - full of flavour and soft textured meat, with crispy skin and the Romesco sauce was great. There was however, this cluster of vinaigrett shallots on top that were quite sharp in taste and didn't contrast well. I didn't think it needed it and it didn't add anything to the dish. On to the next tapas the quality continues with milk fed lamb. This is quite something, super soft meat and obviously an outstanding piece of produce, almost as good as NZ lamb <Welsh folk feel free to eye roll here> and in each plate there was perfection in cooking you don't expect from any tapas eatery.

Round after round of truly delicious plates continue with the chorizo being my favourite dish of the night which was unusual as normally the octopus is the star dish but I'm not sure what happened. The octopus had a gelatinous slimy exterior, tasted spoiled and saturated in oil and so it was disappointing. The pork chops had a lovely caramelised flavour, but were much drier than the other produce that had been served that evening. Overall though, it is still incredible food and the portions sizes were decent for tapas, especially the chicken. I am probably being pedantic over the octopus and the pork but for most folk, I think they will still find it utterly delicious.