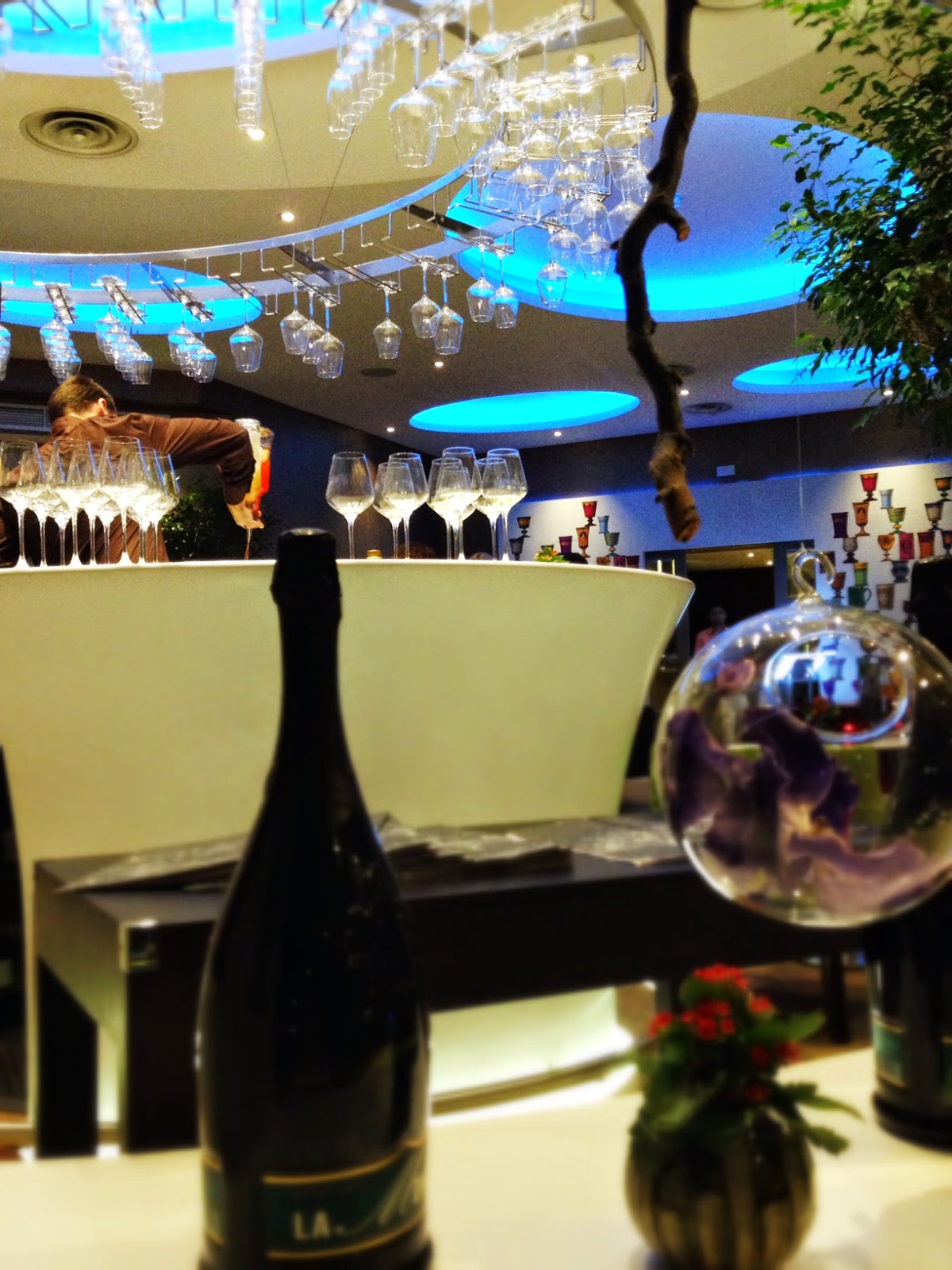 Evoluzione is the restaurant and vision of Hotel Xenia's independent owner Hassanain Al-Nakeeb having opened only 18 months ago in a prime spot on Cromwell Rd in London's South Kensington. I am taken immediately by the design of the hotel itself, seriously modern, slick clean and light - I've always thought this part of London is in desperate need of more modern hotels, and here it is. Just the type of place for rugby loving folk wanting great accommodation for the 2015 rugby world cup next year. That though, is another story and tonight I was here for a special meetup with a gathering of London food bloggers - a night of food fun. 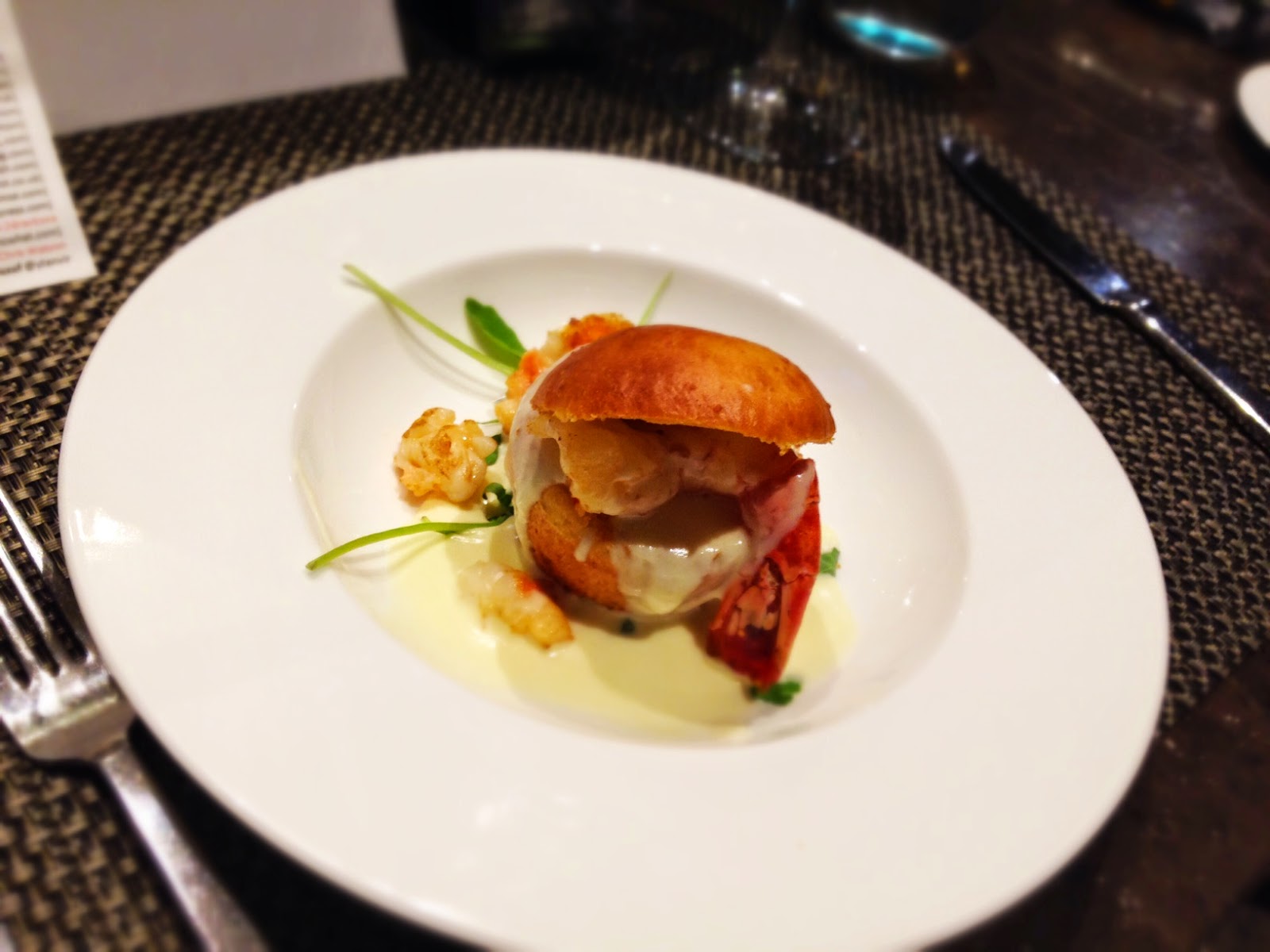 
The main restaurant area is enclosed in a glass interior flanked by an impressive circular bar which also has seating for eating or drinking. We met here with pre-dinner dinner nibbles. The hotel boasts another bar and outdoor area on the opposite wing of the building, and there is also an illusive rooftop bar which is shrouded in secrecy - hooo wee.
Our night was kindly organised by the team behind Zomato, London's new online restaurant discovery guide. We had a six course tasting menu and wine pairings by Evoluzione chef Andrea Angeletti. Andrea has extensive experience, having more recently head chef'd (is that a word?) at Hyatt regency in Dehli and previous holder of one michelin star for Le Busche restaurant in Italy's Marche region.

Tonight Andrea was demonstrating each course, explaining the ingredients native to his roots, all prepared before our eyes in a fun environment.
First off the mark was the Ying Yang Salmon, served with marinated ginger and a shake-your-own bauble of zest. This was one of my favoured plates, great use of fresh ingredients. To follow the Salmon was Cheese bread with King Prawn and Pecorino Sauce. This was a cheese lovers dream, with cheese sauce and cheese bread - which incidentally was deliciously sweet, and uniquely presented.


We were then served canelloni cigars stuffed with ricotta, porcini and veal with a truffled dipping sauce. Nice texture, the filling was cold and contrasted with the hot sauce, good flavour.
Each dish was served with a wine pairing, most of which worked very well against the saltiness of the cheeses, my nod goes to the chardonnay, it was buttery and delicious.
Followed soon after the cigars was the Passatelli with parmesan fondue, another cheese lover dish. The passatelli had good texture, allowing for the sauce to adhere to pasta which incidentally was made with breadcrumb and yep you know it, more parmesan. After this we had a sea bass, probably my least favourite of the plates that were served but it had a divine chardonnay to accompany it and soon after I was presented with a traditional French dessert - the Chiboust, a super sweet but delicious pastry cream with a strawberry reduction.

To finish off the evening's event we were served chocolate shots of Varnelli liquor - Amaro Sibilla was my favourite as I felt  it intensified the chocolate flavour the best.
I was really impressed by the service of the staff in the hotel as well as the food servers. The facilities were lovely, I am tempted should I need a night out in London, for a bit of flash and pazzaz, to stay at Xenia. It is a lovely hotel and great location.


There is a lot of work that goes into organising these events, so I want to say thanks to the team at @zomato who go out of their way to support us food folk so we can help you find the best places to eat in London town!