Gawd, I wish all the meat I cook, all the fish I cook not to mention veges, had these sorts of textures and taste profiles. What do I need to do? Apply some sort of quantum wizardry because that's what they've learnt to do at Hakkasan. Mere mortals like myself will continue to toil away in the hopes of one day getting something even minutely similar in flavour and texture in our own cooking. In the meantime, we leave it to the masters.

I could easily stay all night in a restaurant like this but on this occasion we're limited to a two hour dining slot. Despite this, I really love dining out in London, there's lively atmosphere, the big dining spaces, dark, and if you live out in the boon-docks in Twickenham like me, it's a treat. Hakkasan has two branches in London, and many more worldwide including the MGM Grand in Las Vegas, famous for Liv nightclub which incidentally is also run by Hakkasan's restaurant group.

We ordered a couple of unique Hakkasan cocktails, mine called a 'Walking Buddha' of rum, plum sake, apricot liqueur with peach juice and tamarillo the chic geek had 'The Hakka' (being kiwi the irony is not lost on me :)) consisting of Vodka, sake, lime, lychee, passion fruit and coconut. I appreciate that they have a genuine exotic flavour to them, they are very decent but a Savoy cocktail -they're not.


We went for the soft shell crab and the dim sum platter which consisted of scallop, crab-meat and mushroom fillings. I was amused with the crab, it resembled a birds nest which is another dish Chinese cuisine but immediately I though of Fraggle Rock - 'THE TRASH HEAP HAS SPOKEN'. If you know what this means you'll understand when you look at the pic.


The dim sum's were perfect, the scallop was meaty and the mushroom had plenty a flavour. Honestly this type of food I think is palatable for everyone. The fillings were packed and prepared properly, no gaps between the filling and the skin. The 'trash heap' crab had decent meat content too, other soft shell crab I've had in other establishments have barely any meat. The exterior was crisp, sometimes this can also go soggy but not at Hakkasan.

In between our starter and mains I had a good chance to have a look around and check out the bathroom facilities. Firstly, had been adequately explained and directed where to go but almost ended up in the gents before staff ran after me and showed me the appropriate way to the ladies. I laughed off my embarrassment, joking with the waiter that I indeed knew where I was going and was just playing about. Not! Anyway, when I entered the ladies I saw basins, dryers, err more basins and another set of hand dryers and a wall. Nothing else. what the ..... No cubicles?! I spotted a door, tugged on it, nope it was a locked storage cupboard. Ok this is getting bizarre. I'm looking around for the loo and seriously failing this intelligence test. Do I go back outside and further mortify myself with the staff by saying I can't find the actual loo!? OMG now I am getting desperate, the large cocktail, half a litre of sparkling water are pressing for action. Somehow I managed to calm myself and inspect the panelling of the bathroom wall. It's a door to a cubicle! Thank gawd! The handless, seamless doors were totally camouflaged into the wall. Unfortunately, no one else was in the bathroom at the time so I had no way of knowing. When I came out another patron entered and had the same problem. I explained the wall, my dignity was somewhat restored. :)


Mains came out on a black slate surface with a vibrant, visually striking mix of meats, fish and vegetables. Black pepper rib eye beef in Merlot, Spicy Prawn with lily bulb and almond, Grilled (Chilean - I don't know why they call it Chilean because we all know Chilean Sea Bass is a myth) Sea Bass, Pipa Duck, Cloud Ear Vegetables all served with plenty of steamed rice.

The rib eye had an amazing texture dense but soft, moist, peppery with beefy flavour on top. The bass had a lovely sweet flavour and again moist. The prawn had a delicious mustard/curry like sauce that was served with it, so good the chic geek polished it off with rice.

For our sweets we had a strawberry filo tart, a chocolate and apricot pave, but these were not as high quality as other one Michelin restaurants. We were served by a very good serving staff, however the staff in the reception area and outside weren't overly welcoming (standing back with a clipboard and stony looks with no smiles either there or inside reception). Weird vibe. But the food and drink staff were fantastic. 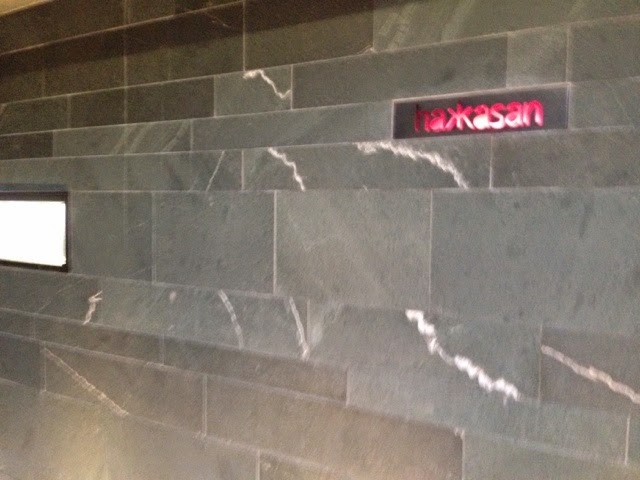